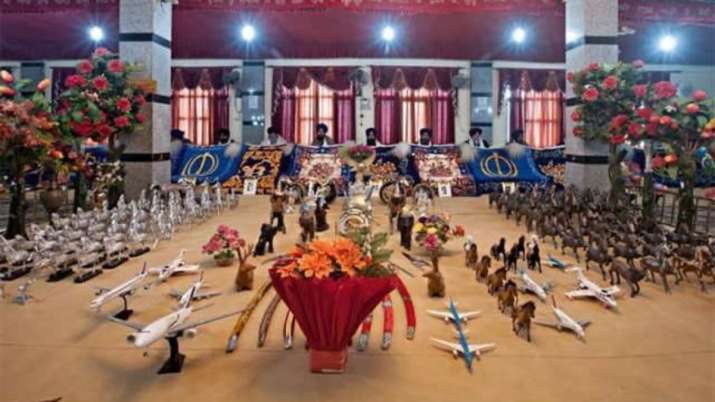 What! Devotees gift toy airplanes to this gurudwara of Jalandhar in hope of a trip abroad; See the pictures

Do you know there is a gurudwara in Punjab near Jalandhar where devotees offer toy planes and hope that one day they can go abroad? Yes, it’s true. Located in the village of Talhan in Punjab, this 150-year-old Shaheed Baba Nihal Singh Gurdwara is a popular name among visa applicants. The locals believe that if a person wants to go abroad, the person can pray here and soon he can get a ticket and visit the destination of his choice.

In fact, the belief has developed to such an extent that there is a huge model airplane placed on top of the Gurudwara. Unsurprisingly, the holy site is popularly known as the “Hawaijahaj” (plane) gurdwara among visitors. Many devotees who visit the place hoping to travel abroad offer toy planes here.

Several Internet users shared their accounts when they visited the place. “A Shaheed Baba Nihal Singh Gurudwara, who is in a village near Jalandhar, is inundated with toy planes by devotees who believe it will help them get a visa. Unfortunately, not much is known about the saint in whose memory the gurudwara was built,” one Twitter user noted.

Another shared a photo of toy planes donated to Gurudwara and wrote, “On my way to #Jalandhar this week, I stopped at Shaheed Baba Nihal Singh Gurudwara – aka ‘hawaijahaj’ (plane) gurdwara – in Talhan , #Punjab. Worshipers applying for visa to go abroad offer prayers and a toy airplane.”

A third said there was a similar temple in Telangana. “#Gurudwara in Jalandhar, #Punjab People who want to travel abroad offer model airplanes to Shaheed Baba Nihal Singh Gurdwara. This gurdwara is considered as a ticket to overseas especially USA. There are also a temple for Visa in Telangana.”

So, have you been planning a trip abroad for a long time? How about visiting hawaijahaj gurdwara first?