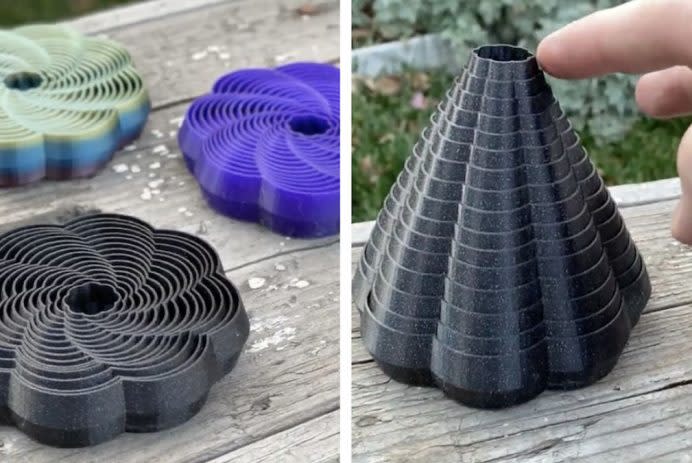 ‘Shut up and take my money’

A Reddit user recently posted a video to the r/autism subreddit of their fascinating 3D printed sensory toys for neurodivergent kids, and they were so popular that the volume of orders “literally broke” their Etsy store.

The clip features a fidget toy called Tornado, constructed from layers of movable plastic that stack, spin and hit all the buttons for sensory pleasure.

When laid flat, the Tornado looks like flower-like spirals. The toy’s satisfying sound and intriguing formation make it particularly appealing.

The Reddit user posted the clip three months ago, showing off the Tornado fidget toy he makes for his children who are on the autism spectrum. The interest generated by the publication convinced him to sell them on Etsy.

Auto Insurance Rates Rise in 2022 — here’s how to prepare

As a result, the volume of orders was so huge that Etsy had to put the store in “holiday mode” until the number of orders went down.

During this downtime, the shop has been expanded to include even more items and toys.

Reddit users took to the comments to share their love for the toys in addition to placing more orders.

“Fantastic news, my son got his for Christmas, he loves them (stolen one for me). Glad you’re doing well,” one customer said.

“I contributed to the dismantling of your shop. My son is on the spectrum and will love it,” one parent exclaimed.

“You might want to market this to people who also like psychedelics, haha. It would definitely be a fun travel toy,” recommended one viewer, to which the original poster playfully replied, “You’re not lying. Fractal pyramids are a HUGE hit with this crowd.

Whether you decide to buy a toy for yourself or your child, it’s inspiring to see a small business focused on helping people succeed.

In The Know is now available on Apple News — follow us here!

If you liked this story, check it out this 3-year-old who had the sweetest reaction when he met a possum for the very first time.

Sensory toy store ‘busts’ after going viral on Reddit: ‘Shut up and take my money’ appeared first on In The Know.

More from In The Know:

Mom asks Chick-fil-A employee if her autistic son can order on his own: ‘I cried watching this’