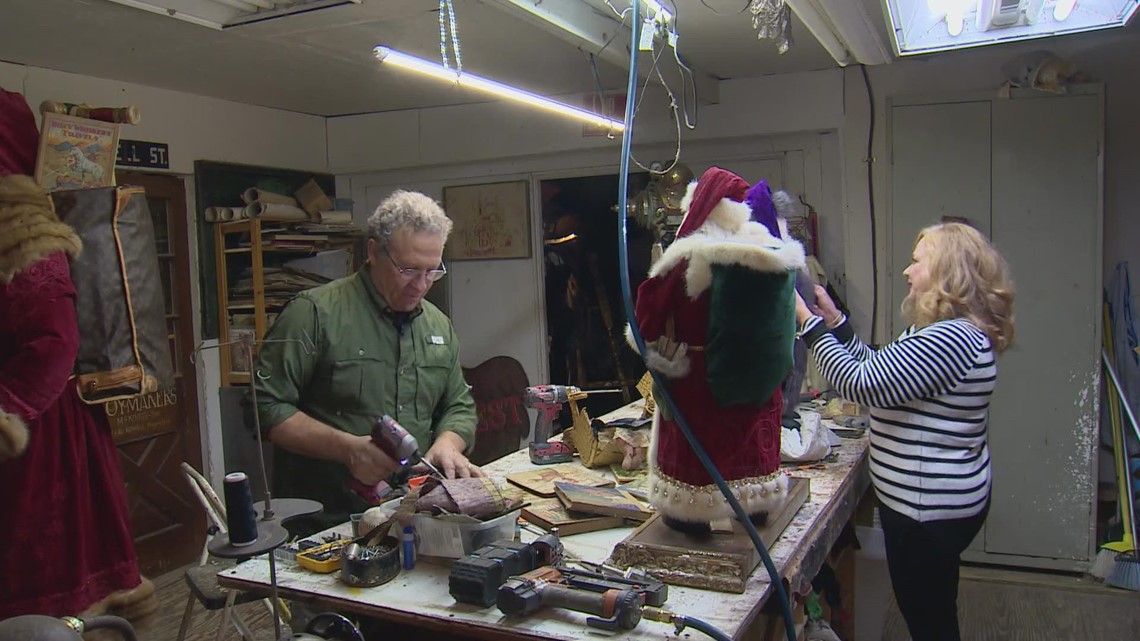 “His thumbprint is all over everything we do,” Cynthia Kidwell said of her stepdad who is the inspiration behind their holiday designs.

MCKINNEY, Texas — For Brian and Cynthia Kidwell, the Christmas holidays aren’t just a season, but a passion that has lasted 35 years.

The McKinney couple are well known for their handcrafted heirloom Santa Clauses, and it’s become a year-round project.

“A lot of our produce is farm fresh,” Brian laughed. “One man’s trash can is another man’s Santa Claus.”

To achieve that “aged” Santa Claus look, the Kidwells scoured garages and barns across the country for dated materials that could be transformed. It’s not a new concept for the family, however.

“We definitely feel his presence in everything we do,” Cynthia shared, referring to her stepfather Al Kidwell. Al was an artist who created for fun and found fantasy in even the most mundane objects.

In early December, the Kidwells had just put the finishing touches on a 7ft Louis Vuitton Santa Claus. The handcrafted Santa required a $2,000 deluxe piece of luggage to remove and beautifully repurpose.

“Now that’s going to put you in the holiday spirit, isn’t it?” Cynthia asked.

Married for 37 years, husband and wife worked side by side to make these handcrafted Santa Clauses. At one point, the couple were making 25 Santas a week. Now they’re made to order – and out of stock for months due to high demand.

They may be making Santa Clauses, but in this toy store, they are truly creating a legacy. Brian takes after his father in that if given the choice, he would only use his father’s tools.

“His stamp is all over everything we do,” Cynthia said. But you soon realize that it’s not just his thumbprint, but his likeness that you’ll find elsewhere: on Santa Claus.

“It was almost like he was doing self-portraits,” Brian described. “All of these faces are faces he sculpted.”

Al bears an uncanny resemblance to the big guy himself. Al molds once made are used to this day.

What Al started, a son and daughter-in-law have continued happily and successfully.

“The root of it all is gratitude,” Cynthia said.