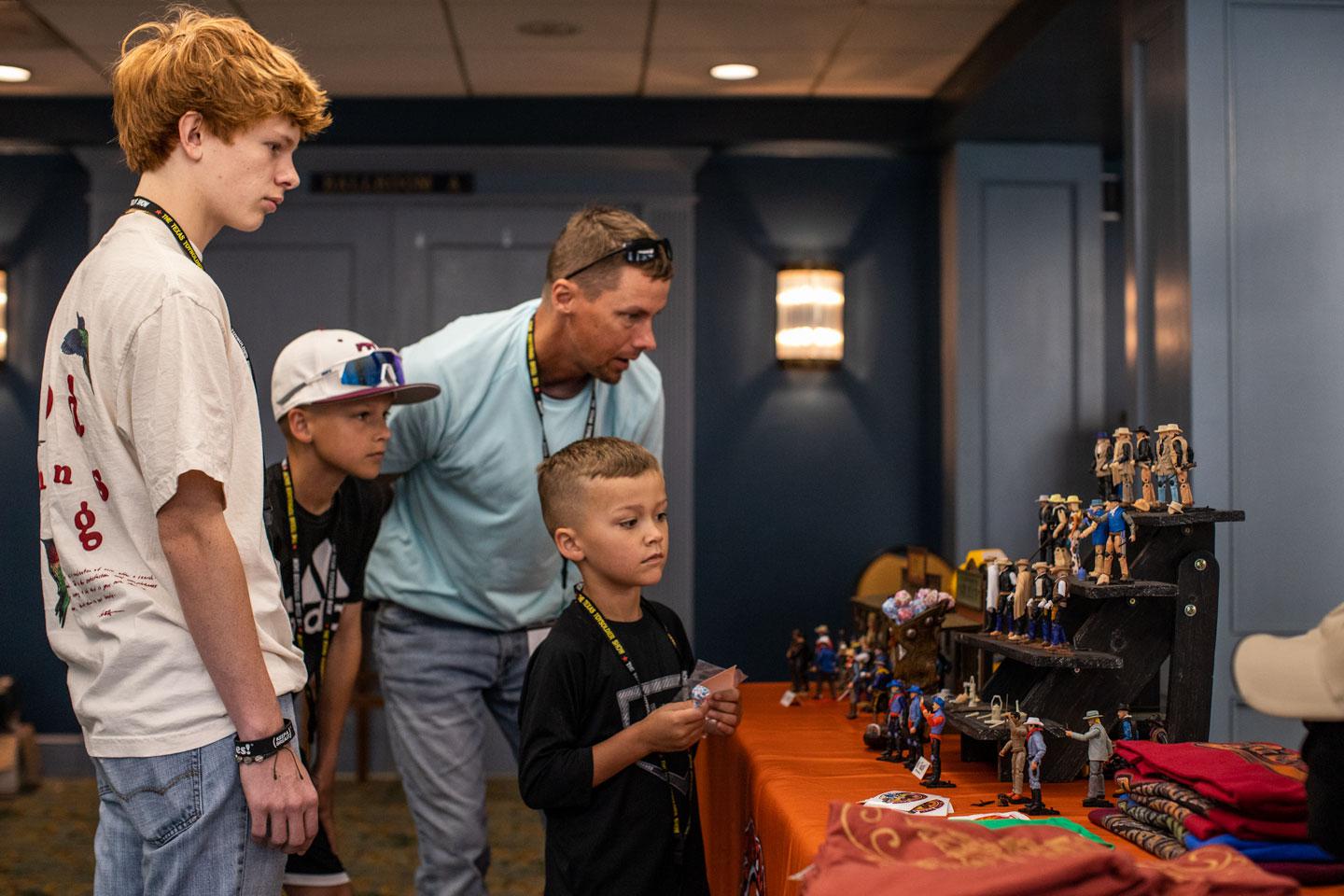 On Saturday morning, the normally airy downtown ballroom of the Menger Hotel was decked out in miniature battlefields. On one side, an old American militia fired at Native American warriors in a clearing in the woods. On the other, patrol boats surveyed a stretch of sea off the Vietnamese coast as helicopters fired rockets overhead.

The Texas Toy Soldier Show returned to San Antonio for the first time since the pandemic began in March 2020. Dealers got to work Friday afternoon to transform the ballroom into a historian’s dream, filling inside dioramas depicting dramatic battle scenes and row after row. of figurines no more than a few inches in height.

“There’s no other show like it in Texas,” said Martin Vasquez, owner of historic novelty boutique Davy Crockett’s Cabin and an avid amateur historian himself.

Moving around the room with his two young nephews, 24-year-old Marshall Samarrtea seemed to agree. Samarrtea said he started attending the show two years before the pandemic because it offered products “that you don’t find in regular stores or even antique shops anymore.”

Vasquez, who co-hosted the show with toy soldier maker William Britain, regularly participates in re-enactments of iconic battles such as the Battle of the Alamo. The 53-year-old is often asked to play General Antonio López de Santa Anna due to his extensive knowledge of the military commander. However, his retirement is on the horizon.

While the hotel was a stone’s throw from the Alamo, the soldiers on display in today’s spectacle were not limited to those who fought at the mission-turned-fortress in 1836. There were Zulu warriors, Roman legionnaires, English medieval knights and dozens of other fighters. Living historians—people dressed in period clothing and wielding period paraphernalia—have echoed them in life-size scale.

Inspecting a soldier, Scott Matty, 60, said he decided to don the Irish Volunteers’ forest green uniform because “it just adds to the authenticity and fun of the event”.

Matty, a registered nurse at University Health, began his career in pageantry in the 1980s after a friend recruited him to march in parades. Since then, he’s played a Union horseman during the Civil War, a Mexican infantryman during the Texas Revolution, and other characters. In December, the veteran helped re-enact the World War I Christmas Truce at the Museum of the American GI in College Station.

“It’s fun and it’s a learning experience,” he says.

In addition to toy soldiers, the show also had books, prints, antiques, and even historical artifacts such as buttons available for purchase. But the toy soldiers were the main attraction. Vasquez said those at the more expensive end of the spectrum could cost hundreds of dollars due to the painstaking care taken in their construction.

Noting that some dealers had worked for museums, Mike Miller, who sold models of buildings he made from Popsicle sticks, described the dioramas on display as “little works of art”.

Collecting toy soldiers is serious business for enthusiasts like Miller, who has been doing it for decades.

His interest began early in life when his father dropped him off at a movie theater to see John Wayne’s 1960 film “The Alamo,” but he began collecting seriously when he won big at a a horse race after college.

In the years since, Miller has acquired so many soldiers that almost every flat surface in his house is covered with them. He recently spent over $1,000 on a model Viking longship.

“The only space I have left to put toy soldiers in is the bathroom,” he said. “The kitchen island is full, the formal dining room is full.”

Miller is from Galveston, but other dealers and collectors had driven or flown in from as far as New Mexico, Arizona, California, Louisiana and Illinois to see the show, according to Vasquez, who expected about 500 people to attend. However, the audience didn’t consist of adults only.

Many children and teenagers were also present in the ballroom on Saturday morning, an age range that Matty said boded well for the future of the industry. He said he spoke to a boy dressed as Napoleon who knew a lot about Irish history.

“They are going to be our legacy,” he added.