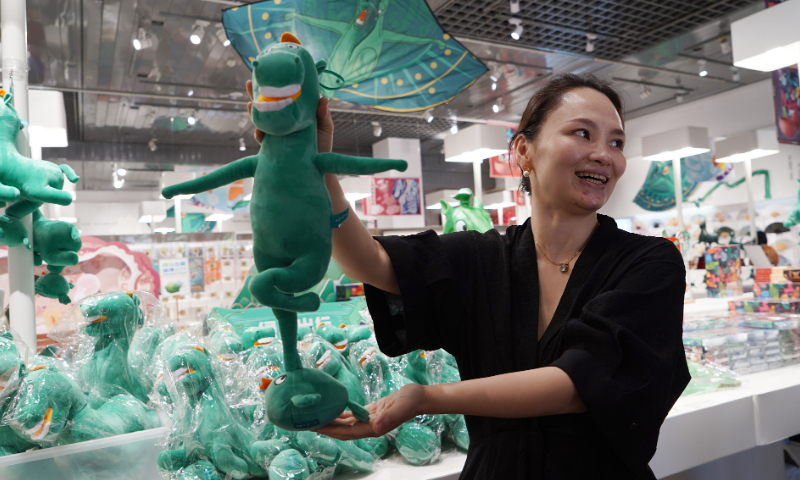 An employee of the Gansu Provincial Museum shows a stuffed animal of the ancient bronze horse statue “Bronze Galoping Horse Treading on a Flying Swallow” on June 28, 2022. Photo: VCG

The Gansu Provincial Museum said the museum is doing its best to restock its inventory of a plush toy depicting an ancient bronze horse statue that recently went viral on Chinese social media with over 10,000 units sold in the museum’s official Taobao store from Sunday. evening.

The plush toy of a green horse stepping on a flying swallow is a cultural product featuring the bronze horse statue, popularly known as the “Bronze Galloping Horse Stepping on a Flying Swallow” which was found in the tomb of Leitai from the Eastern Han Dynasty (25 -220 AD) in the 1960s in Wuwei and is now housed in the Gansu Provincial Museum, Xinhua News Agency reported.

The museum said in a post on its official Weibo account on Friday that all plush toys were sold out both online and in its store and thanked all fans for their support.

The Global Times has learned that more than 10,000 people have placed orders at the museum’s official Taobao store, which is now on presale.

A Taobao customer service representative told the Global Times that the toy will be shipped around 25 days after customers place their orders.

The plush toy has become increasingly popular among Chinese netizens for its unique design. Several users commented on Weibo saying the plush toy is “cute” and “they just want to have it all the time.”

The message also clarified that the Gansu Provincial Museum owns the exclusive property rights of the plush toy and has never authorized the production and sale to third parties and reminded consumers to protect their interests because some unscrupulous merchants have illegally produces and sells plush toys.

2022-07-03
Previous Post: Moms are launching a $39.99 sex toy that blends in with your skincare products on a shelf: Vacation Vibes
Next Post: Emma Hayes slams toy store for lack of Panini sticker albums