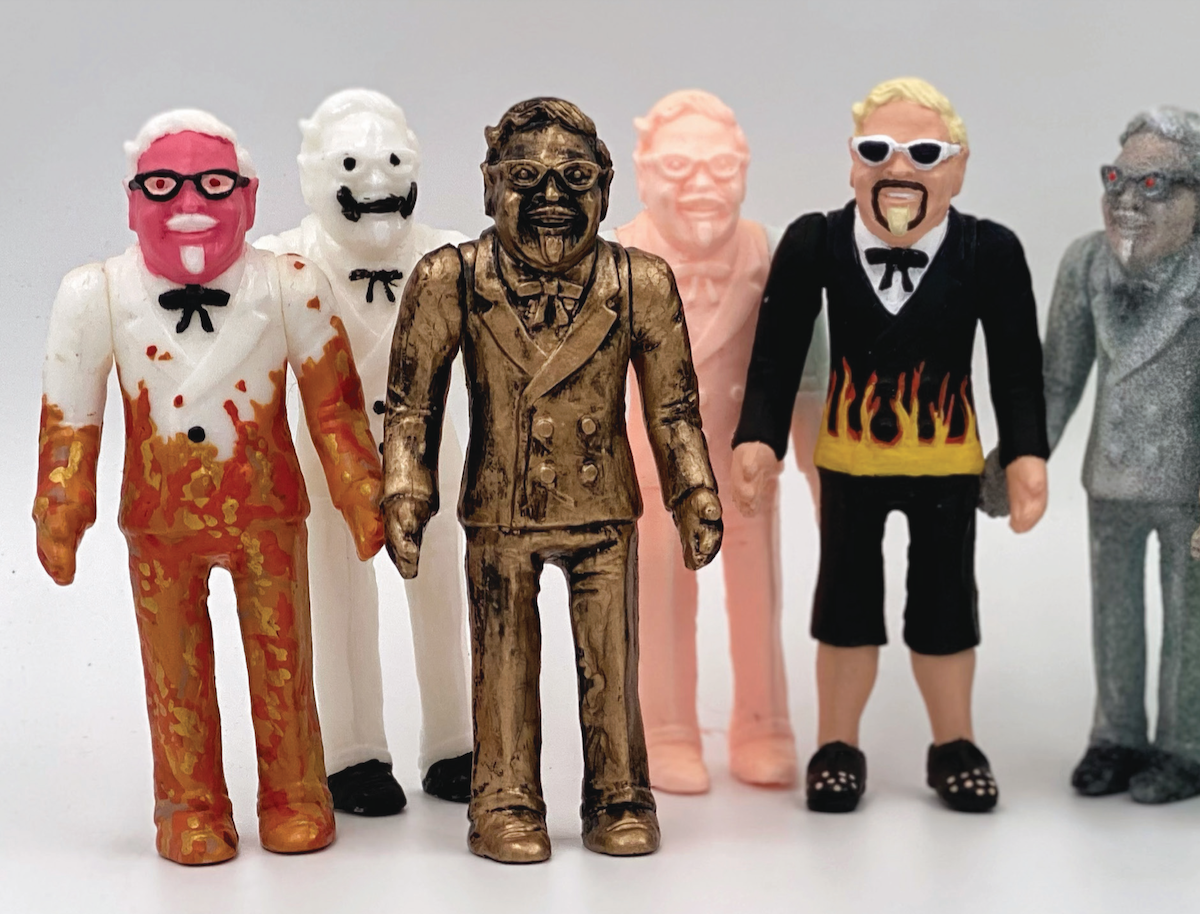 By: Mark N. Hamlin
In: Toy shop
Click to enlarge

Photo: Provided by Earth to Kentucky

Some of the figures displayed in the Earth to Kentucky art exhibit, The Colonel: A Group Art Exhibition

Colonel Harland David Sanders is synonymous with fried chicken, but who is he really? The man started selling his secret recipe chicken in the 1930s before launching the KFC franchise in the 1950s. Today, his cartoon face – complete with glasses, beard and western bow tie – is pasted on the branding of the fast food franchise.

The life and lore of Sanders has been the subject of several recent films. KFC produced a lightweight mini biopic for Lifetime called A recipe for seduction, with Mario Lopez as Sanders. A more serious film, titled A Finger-licking Good Story: The Life of Colonel Sandersis about to spin, making the white-haired Southern gentleman dead for 42 years all the rage in pop culture, for whatever reason.

While an illustrated likeness of Sanders is how most people remember his face, Covington independent toy store Earth to Kentucky hopes to change that.

The Colonel: A Group Art Exhibition features the work of over 30 different artists from around the world. Each artist created a unique depiction of Sanders using an action figure-sized “Colonel Blank” resin sculpture by California-based artist Scott Cherry as a model. The designs reimagine Sanders as Guy Fieri and The Joker, and there are gold-plated and striped Colonels as well as acid-dipped Colonels – it’s all colorful, absurd and weirdly appetizing.

Dustin Benzing, co-owner of Earth to Kentucky and co-host of the show, spoke CityBeat recently to learn more about the origins of the exhibition, the artists and the strangest pieces on display. The Colonel: A Group Art Exhibition runs until May 7.

CityBeat: Did you organize this exhibition? Where did the idea come from?

Dustin Benzing: The idea of ​​this show has been in the air for quite a while, in different forms. My friend Scott Cherry, an artist from California, and I had ideas for this, but it wasn’t until he sent me a picture of the sculpture in progress (Colonel) that it really started to come to fruition. I think Scott really worked on most of the framework for how we ended up putting it together and organized most of the programming. It was a collaborative work, but I really wanted to give him the reins since the show is built around his sculpture.

BC: How would you describe the Colonel’s original sculpture? Interesting notes on the original artist?

comics: The colonel figurine is really fantastic. Scott still manages to infuse so much of his personality into his work. He’s one of the most talented people I know. In addition to his art toys, he does black velvet paintings and has a really fantastic stop-motion style comic called barbaric rage. It’s always great when you find a reason to collaborate.

BC: Tell me about your favorite items on the show.

comics: Honestly, this show has so many of my favorite artists, and they all knocked it out of the park. I seem to be dodging the question, but it’s the truth.

BC: Did local artists contribute?

comics: We have about six local artists in the show, including Maximus Patton (1 Trick Pony), Jake Hill (Skull & Void) and Jonathan Queen, who created the Kenner (toy) mural downtown.

BC: Which sculpture traveled the furthest distance to Kentucky? That he has done?

comics: I think it’s a tie between Jose Pacheco (Pez Banana) in Venezuela and Russell Taysom in the UK. Both are about 4,000 miles from here.

BC: Will the items be on sale after the end of the fair? If not, what is their fate?

comics: The pieces from the show go on sale (April 15) at 5 p.m., in-store and online. They will remain on display until the end of the show so people have the opportunity to come to the store and see them in person.

BC: Did you make your own creations for this exhibition?

comics: I have a piece in this show. I couldn’t do anything about it, honestly.

BC: Do you like to eat KFC? Does it even matter with this event?

comics: I haven’t eaten KFC in a while, but seeing some of these pieces actually made me a little hungry. I’d like to think this show has more to do with the Colonel’s mythical status as a Kentucky icon than it does with his fried chicken, but I’m pretty sure there will be a lot of both.

The Colonel: A Group Art Exhibition runs through May 7 at Earth to Kentucky (836 Main St., Covington). More info: earth2kentucky.com.

Send CityBeat a news or story tip or submit a calendar event.