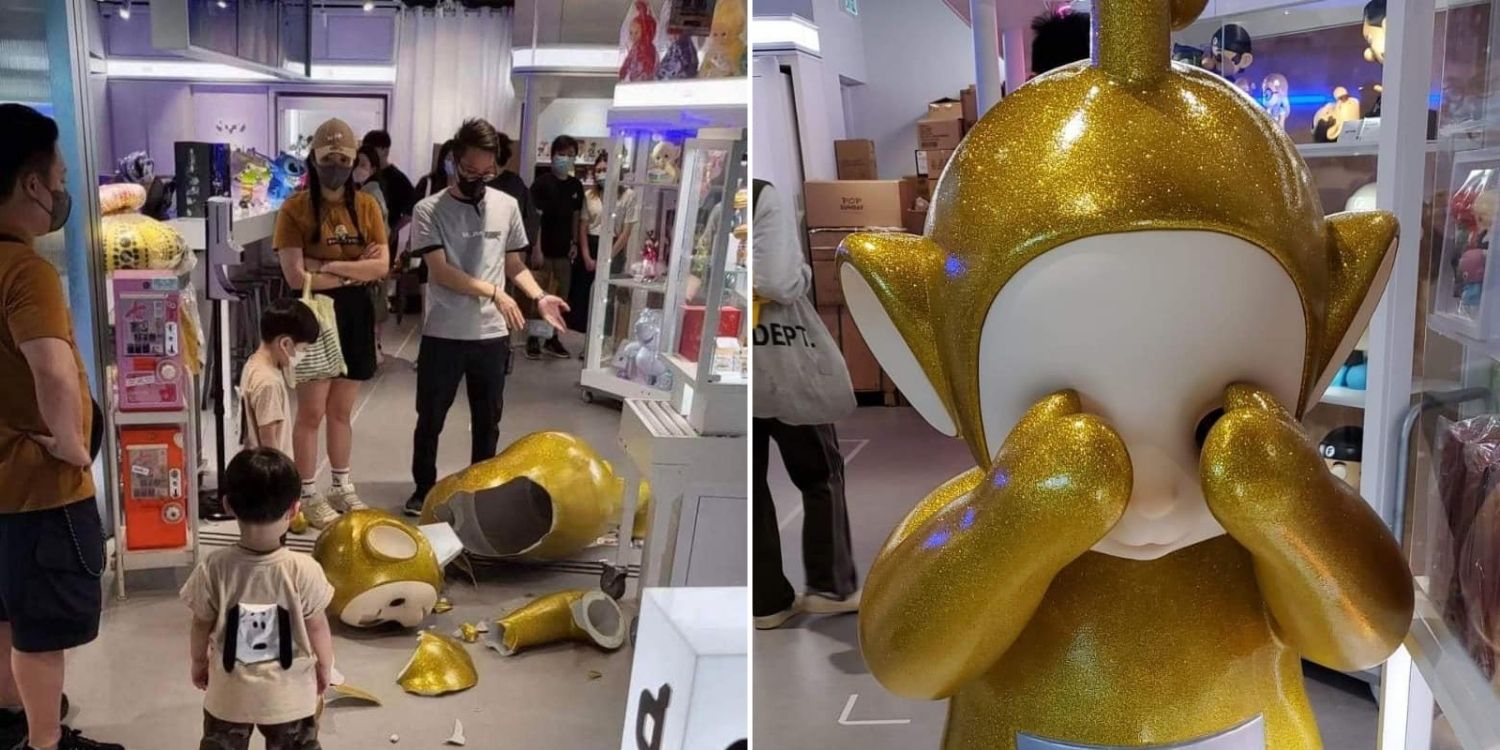 Most parents like to take their kids to the mall toy stores to provide them with a dose of fun and excitement.

Unfortunately, for a family in Hong Kong, such a shopping spree went wrong.

After a five-year-old boy allegedly broke a huge golden Teletubby figurine at a toy store in Mong Kok, Hong Kong, his family had to compensate the store for S$5,248 (HK$30,000).

However, the incident later caused an outcry among netizens.

Dimsum Daily reported that on Sunday May 22, the five-year-old boy’s parents took him to Kk plus, a toy store in Mong Kok, Hong Kong.

While in the store, the boy accidentally bumped into a 1.8m tall Teletubby figurine worth 9,237 Singapore dollars (HK$52,800).

According to China Press, the boy’s mother was out shopping when she suddenly heard a loud noise behind him.

She turned around and noticed that her son had damaged a Teletubby figure. 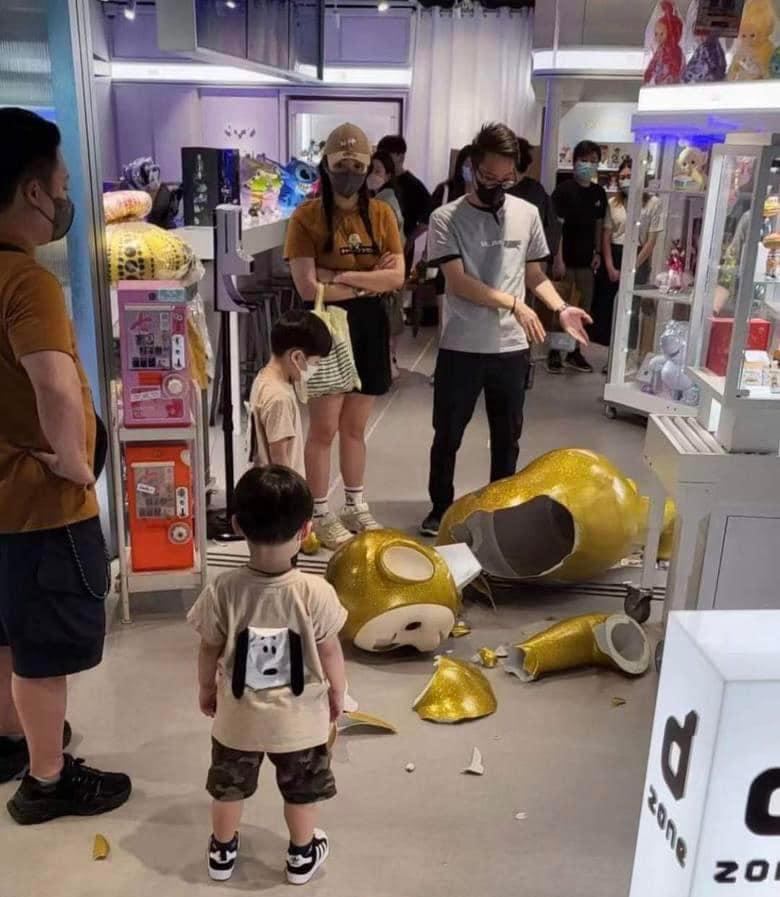 One of the store employees then allegedly accused his son of deliberately kicking the figurine.

Blaming themselves for not having educated their child well, the two parents hastened to scold the young boy.

Mom realizes staff may have wrongly accused her son

After the incident, the mother shared that she received a video clip from someone.

Video showed her son only lightly leaning on the figure before it fell and shattered into pieces.

She later told China Press that she felt the staff went too far in accusing her son of kicking the figure.

Claiming to have been so affected by the incident, she apparently no longer dares to go to shopping malls.

Netizens accuse Hong Kong toy store of not getting a figure

The incident later went viral on the internet, prompting a Kk plus staff member to speak out about the case.

They claimed this was not the first time a customer had knocked over and damaged this particular toy in their store.

A netizen also pointed out that this was the third time such an incident had occurred. There has yet to be any verification of these claims at the time of writing.

According to SET News, another netizen posted a photo taken last year that showed Teletubby’s character standing on a platform surrounded by retractable belt barriers. However, no such barrier was in place at Mong Kok’s toy store. 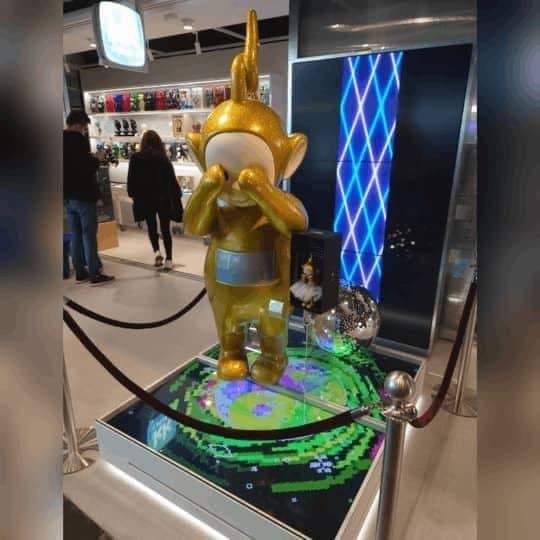 Some have speculated that the character was “literally placed in the middle of the store waiting for accidents to happen” so the store could claim compensation.

Others have suggested that the store should be liable for damages, as anyone walking past the figure can potentially hit it, including adults.

They also felt sorry for the parents and the young boy who were probably shaken by the incident.

Lawyer looks into the matter, says the store is responsible

A lawyer who spoke to Hong Kong media weighed in on the matter, saying that if the child is under 10, neither he nor his family can face charges, China Press noted. The store should not claim compensation from them either.

He pointed out that although the family has already paid for the damages, they can request a partial refund.

The store must also ensure the safe and proper placement of its figures by barricading, guarding, or locking them firmly to the ground.

He added that children might not be aware of or understand the warning signs in front of the figure.

The lawyer suggested that the family request verification of the real value of the figurine, and not just accept the amount indicated by the store.

Second, they should check with the store if they have insured the Teletubby figure before negotiating a shared liability.

The store releases an official statement

On Tuesday, May 24, Kk plus released a statement on their Facebook page to clarify the incident due to public outcry. 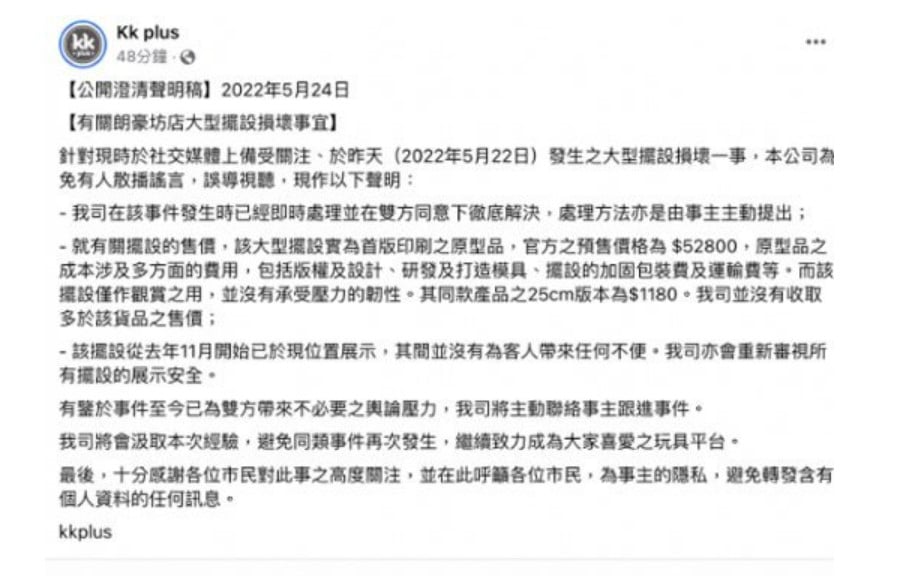 According to the Dimsum Daily translation, they said:

The Tellytubby sculpture has been on display at the same location since November last year and has caused no inconvenience to guests. Our company will also review the display safety of all decorations.

The store also claimed to have dealt with the incident right after it happened and resolved it out of court with the consent of both parties, according to the family’s proposal.

They also explained how they calculated the cost of the figure, emphasizing that they had not overstated the price.

Kk plus concluded that they would take the initiative to contact the family to follow up on the incident. They will also learn from this experience to prevent similar incidents from happening again.

Better to be safe than sorry

This incident certainly elicited different reactions and points of view.

If the store did indeed address the matter privately with the family, we hope all is well now.

Still, this incident can perhaps serve as a reminder for toy stores to take note of the safety of their displays, especially for fragile and expensive items.

As for parents of young children, it is strongly advised to watch your little ones while shopping in malls. In this way, unwanted accidents like this can be better avoided.